From 1993-2005, I worked for a construction trade newspaper with Monica Potter’s Aunt Sue. I heard office tales about her stunning niece who was doing catalog modeling and commercials and even got to meet her once at some company event or other. I also crossed paths with Monica’s Uncle Bill of Brokaw Inc., an advertising agency, since I had begun my career in advertising.

Fast forward to October 2016 when I heard about Monica’s newest TV venture, “Welcome Back Potter,” a reality TV show on HGTV in which Monica, her mother and her sister work to renovate their family home in the North Collinwood neighborhood of Cleveland, which is right around the corner from my office at HGR Industrial Surplus. I decided to send her a message on Facebook to see about an interview. I figured, “What do I have to lose?” A few days later I got a response basically saying, “Yes.” I messaged her the questions. I got a message back with a phone number. After some phone tag and texts, we chatted for almost an hour. Who knew that she cares so much about manufacturing and a skilled workforce, and is actually doing something about it?

She is a passionate, intelligent, earthy, kind, fun, friendly, infectious person that you immediately want to hang out with for hours over a few double-dirty martinis with blue-cheese stuffed olives. In the first few minutes of our conversation, she jumped right into the nitty gritty of her philosophy, “It’s not about the business or the house but about doing something on a bigger scale, which I have wanted to do since I was 10. My projects can be a catalyst for people in Cleveland to begin a dialogue with government and politicians.” She says that when she opened her second Monica Potter Home store in The Old Arcade in Cleveland, it was timely because she wants to bring back small businesses and jobs to Cleveland but can only do so much; she need everyone’s help – the mayor, councilmen and law enforcement.

I asked her what she wanted to do when she was 10. She tells the story of calling then-Mayor George Voinovich’s office and leaving a message for him through his secretary because she had an idea. She wanted to take the old Memorial School Building in Collinwood where she went to kindergarten and have a place in that building where people could sleep, eat and learn how to do something in order to get a job, graduate, move out and get a house so that their families could be proud of them and they could feed their families. 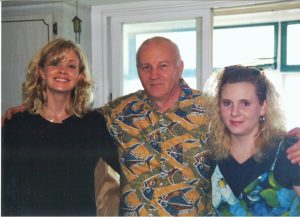 How did a 10-year-old come to have thoughts like that? It all goes back to her dad. He’s the reason she bought back the family home in Collinwood, started Monica Potter Home and is looking to do even more. He was an inventor, with 78 patents, who made all of his inventions in the basement of their house then started a fishing-lure business on St. Clair Avenue. She was included in his inventing process and tinkering. She says, “I always did small construction and renovation projects with my dad. I was the boy of the family – changing oil, changing tires, building things from nothing.” She worked at the lure business pouring molds, putting in wires and hooks, and packaging. He had an interest in chemistry, biology, medicine and alternative medicine. He experimented with essential oils and other compounds to treat her eczema. Now, she also is inventing and wants to patent her designs and currently works with a chemist to go through formulas to create the bath and beauty products available through Monica Potter Home. Her mother cleaned on the side at Euclid Square Mall and would take her kids with her. Monica says she learned to act by watching and imitating people in the mall. She started Monica Potter Home because she wanted to make great products for the home that were inspired by her father and mother who liked to keep a nice house and decorate even if they didn’t have a lot of money. You can see how much family, hers and yours, means to her.

Her family originally moved into Collinwood in June 1971. She was born two weeks later. They sold the house in 1987 to move to Alabama. She bought the house back in 2012 and had a film crew come from Los Angeles that summer to document more than 1,000 hours of footage on the work that they did on the home with the intention of creating a documentary. And, when something is meant to be, it is meant to be. Renovation was finished in June 2016 as her lease on a farmhouse in Hiram, Ohio, was up. She occupied the home on June 30, her birthday, and had her family’s priest come to bless the house. She says it was her best birthday ever. She still lives in L.A. full time and spends 10 days per month in Cleveland to work on Monica Potter Home and efforts to renovate more homes in the area.

She originally decided to film the renovation as a documentary because she wanted to tell a story; so, she banked the footage and was working with a filmmaker in L.A. Then, she was approached by a couple of

networks about doing a home renovation show. She said she would do it as long as could produce it and not exploit her family. She went with HGTV and is really happy with result. She says that, “although they showcased the house, it was a different show for them because it showed the City of Cleveland, sisterhood, and what we are doing here and why, not just doorknobs and doors and hanging drywall.” The family worked 7 a.m to 10 p.m. each day, sometimes even sleeping in the car. Monica designed the fixtures, and everything is repurposed. She has an inventory system the documents everything down to the nails pulled from the walls, and she is recycling them to make other things.

With her roots in Collinwood and her passion for manufacturing, her ambitions include getting the useable space and machinery to make everything for Monica Potter Home from North Collinwood at a workshop with an apprenticeship program where people can learn from master craftsmen and technicians. This is a family grassroots effort, and she is working hand-in-hand with Brokaw Inc. to create a training space that currently is self-funded with no grants or partners. She said it’s not about a celebrity having a store or two but about creating jobs and making people proud of what they are doing, as well as helping people have incredible products at an affordable price in their homes that are made in the U.S., not overseas. She says that she wants to put up a sign that says, “Who wants to work? Who wants to learn to do something?” when she sees all the shutdowns and empty factories along St. Clair Avenue and as the Baby Boomers age out and are not being replaced with skilled labor.

With heart and soul, she blurts, “We’ve got to get our s!*# together. The Cleveland Indians and Cleveland Cavaliers did great. I love that we’re winning, and our teams, and the resurgence in the area. It’s Believeland, but now it’s time for us to believe in ourselves. Our great sports teams are catapulting us and making us proud. Now, it’s our turn.”