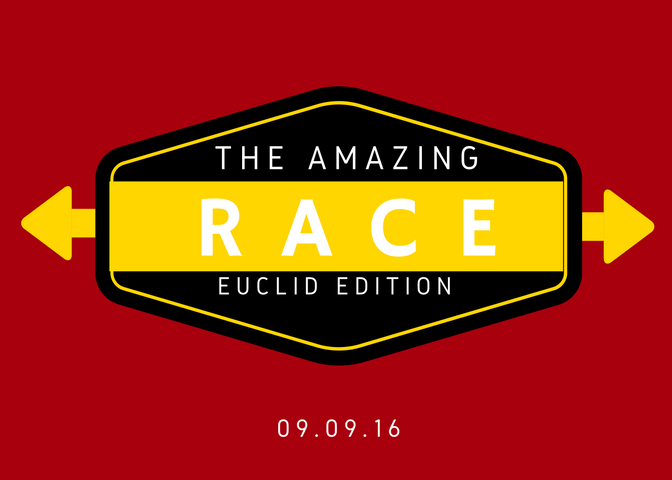 The Euclid Chamber of Commerce brought The Amazing Race to Euclid, Ohio, and HELP Foundation hosted team registration and the post-race celebration at its Adult Day Support Program.

I was a member of the planning committee, and HGR sent two teams to compete as well as being one of the stops on the route. Here are photos of some of HGR’s participants:

Tina Dick, HGR’s human resources manager, recaps some of the stops in the race: “At soccer golf at Briardale Golf Course, April Quintiliano made a new friend named Rosie while Beth Hietanen and I kicked the ball down the green. Kim Todd did an amazing job climbing the rock wall. “Ain’t no mountain high enough” for KT. It also was interesting to hear that the Cleveland Rock Gym has been part of Euclid for more than 20 years. I lived in Euclid for close to 15 years and never knew it existed; my kids would have loved it! Our Lady of Lourdes National Shrine is as beautiful as ever and was probably the nicest surprise. I had been there but my teammates never had. The NEO Sports Plant looks amazing, and chair volleyball is a blast! It would be a great event for HGR staff. HGR’s amazing showroom was new for many participants. The gift baskets, pizza and subs were a great end at HELP Foundation. Euclid Chamber did an “amazing” job putting this together. Count me in next year. We had some challenges but our team finished!”

Joe Powell, HGR’s graphic designer, who was teamed with Steve “Smitty” Smith, says, “Smitty came up limping while sprinting to the first task at Atlas Cinemas. For the rest of the race he played navigator, and I took care of the events. I couldn’t hit a free throw to save my life, but instead moved back to the three-point line and made six in a row. We were neck and neck with another team for the last task, and I had to slide a la baseball style in front of them for a second-place finish. Overall, it was a fun experience, and I saw parts of Euclid that I will revisit in future because of this.