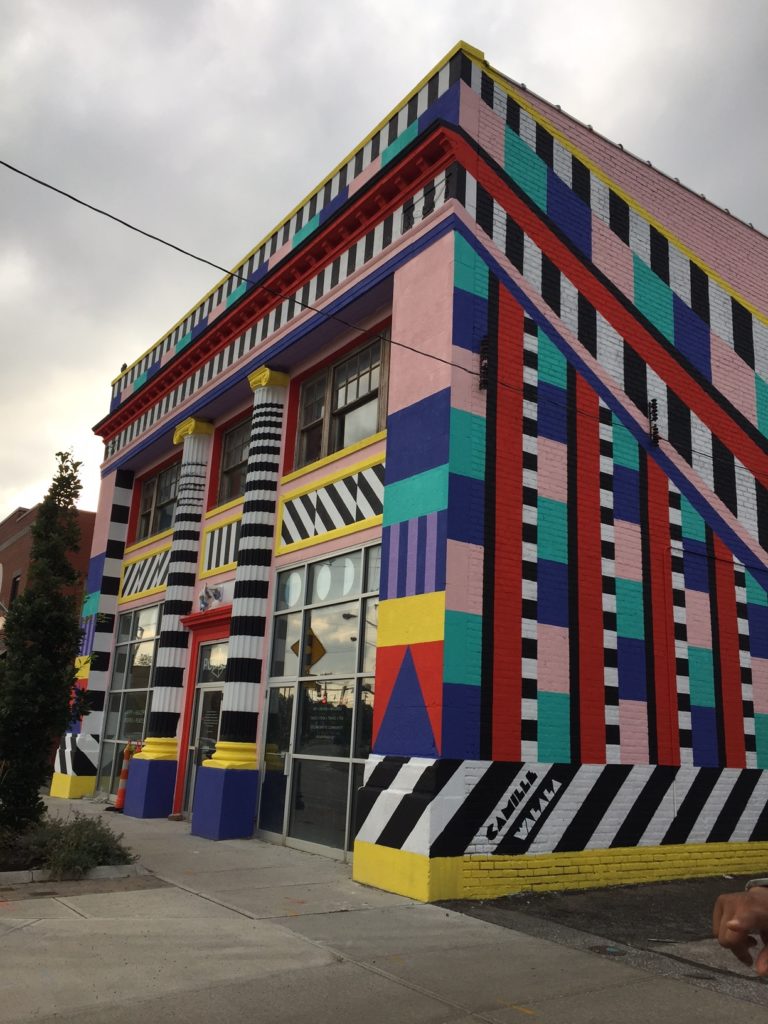 Perhaps you have lately noticed a fresh spot of color acting like a beacon to Waterloo Road. The new mural, designed by French-born and British-educated designer and artist Camille Walala was commissioned by Jack Mueller, a real estate investor who owns the former bank building on Waterloo Road. The building, upon completion of its interior, will be home to Poplife, a pop-up gallery, health food space, and donation-only yoga studio.

Walala’s work is inspired by the Italian-led Memphis Movement from the 1980s but is updated with influences from the Ndebele tribe and optical art. She has large-scale works in some of the most important cities in the world: New York, Paris, London, Sydney, and now Cleveland. Mueller says he stumbled across Walala’s work online and was excited about its Memphis influences. From there, the artist and the investor developed a friendship through Instagram, both sharing a love of graphic shapes and bold colors. When Mueller saw an opportunity to commission a mural from his favorite artist, he reached out to bring Camille and her partner, Julie Jomaa, across the Atlantic for the project.

Mueller says it is important to him that the building’s exterior reflect its interior by revealing his business’ dedication to the sublimity of bold shapes and bright colors. He puts it simply, “I want to make the world a more colorful place.” Walala’s aesthetic, bursting with sunny colors, such as cherry red, millennial pink, canary yellow, and nifty turquoise, adds a splash of color, hopefully a smile, and a little bit of wonderment to the days of many Clevelanders.

Waterloo is lucky to have an investor like Jack, who believes in public art and in making art as accessible as possible. Public art is important because if you live in a neighborhood where there’s poverty, that doesn’t mean people shouldn’t be able to see art on their walls just for art’s sake. Every neighborhood deserves something beautiful, something that provides a unique point of pride and helps carve an identity out for residents. In particular, street art is like having a conversation outside, and murals act as canvases that humanize our urban landscape. Walala’s piece starts a conversation about the creativity and energy of humanity and about the egalitarianism of street art to passersby.