I know that your career in reclaimed art started when you rescued broken slate roofing tiles being torn off of buildings. Why did you do that?

I saw the tiles leaning on the side of a random building as raw material that was neglected. There was something so beautiful sitting there broken. It prompted me to buy an industrial-grade wet saw so that I could cut the fragments into small pieces that could be used for creating mosaic surfaces. I guess that I saw myself in the tile as I went through periods of neglect and wanted to be scooped up and turned into something new. It was subconscious. We learn and heal by doing. It was the beginning of my therapy. I went on to create an entire product line of picture frames, mirrors, benches, and tabletop accents that I sold through stores and galleries coast to coast. Now, 20 years later, I design products in a wide variety of reclaimed materials, including wood, steel and glass.

Did you create art prior to that time? Were you always an artist?

I have been selling my handmade creations since I was 14 years old. Eventually, I began freelancing as a graphic designer and worked in sales and marketing. In 1997, I was between jobs and bartending at night so that I could have time to make and sell my functional art during the day. Starting and growing is thematic for me. I found that I missed the process of building with my hands when using a computer all the time, but working with reclaimed construction materials was a bit of an education back then. This was before the term Going Green had been coined or the Maker Movement was a thing; so, people had to be taught about why industrial salvage was so amazing.

How did you go from being an artist to having a business and a fabrication shop that sells to top U.S. companies?

I spent many years selling my handmade art, furniture and gifts at festivals and trade shows across Ohio and beyond. Every year taught me something new about consumer buying habits, my products’ unique selling features, and how to drive more sales. In 2010, I grew out of the festival scene and set up a permanent showroom inside 78th Street Studios. Once I presented my work in a more sophisticated manner with an actual point-of-sale system, I was able to attract more serious customers who wanted me to create custom furniture, wall features, corporate gifts, and high-end home décor. Once the demand grew, I had no choice but to farm out aspects of production to various fabricators I trusted. That was the only way for me to scale.

How has your work evolved?

I went from being known as just a fine artist to being a successful product designer to now expanding into interior design services. Recently, I curated the two-bedroom model suite of a 306-unit multi-family housing development at The Edison at Gordon Square, filling it with custom art and furniture that I designed with the help of many local makers in Cleveland.

Who is your favorite artist?

Andy Goldsworthy, a prominent eco-artist of our time, works with found organic materials to create biomimic outdoor sculptures. He then takes photos as they decompose over time. It’s stunning work. Since I’ve been focusing more on accessories and small furniture these days, I have been very interested in other product designers and what they are doing. I’m a huge fan of Nottingham Spirk and all the products they’ve invented for major brands around the world. They design for function not just beauty, and that’s very important to me. 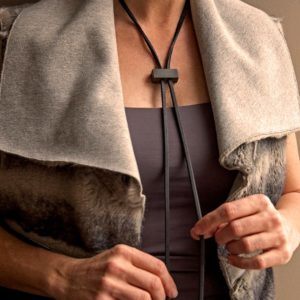 What kinds of items are you currently making?

I just launched a new jewelry item a few months ago that I can’t keep in stock – The Cleveland Bolo. It’s made from real leather and scrap pieces of .5” square steel rod from my buddy’s metal shop. It’s very simple but modern. Other makers in town build tables out of reclaimed wood, and, sometimes I will dig through their piles of scrap for discards that I can repurpose into some small product. I call that polyclaiming, when the material is on its second or third generation of being repurposed.

Why did you locate at 78th Street, and why Cleveland?

In 2010, I went out to look for a location where people were already starting to migrate for art and design. 78th Street had the only thing going with dozens of makers in one place, as one destination. Plus they had the marketing and programming to back it up rather than simply being a sleepy live/work building.

I’m from the Southwest – born in Los Angeles but grew up in Scottsdale, Denver and Boulder. The desert and the mountains have definitely influenced my aesthetic. Right out of college in 1992, I married a man from Cleveland, and through that experience I also fell in love with the city. Before that, I had never been further east than the Mississippi. Ultimately, I became fascinated with the organic and industrial paradox of Cleveland, which has inspired my design aesthetic from the beginning. We truly are a forest city.

What made you decide to make Movers & Makers, your TV show that was piloted locally on WKYC and is being shopped to networks right now?

Having been in business for 20 years with a distinct brand around handmade, artistic products, I felt it was time to share my story with a broader audience both inside and outside of Cleveland. The purpose of Movers & Makers as a TV show is to propel the Maker Movement and my role in it through an entertaining platform. I see great value in giving more air time to the creative process and not just to the before and after. Besides, there’s a huge audience of women out there who are strong DIY champions and who are capable of things their mothers weren’t. Through woodworking, welding, and computer technology, they’re making all kinds of things and becoming entrepreneurs in the process. That’s what it’s all about. I love the instant gratification skills, like welding, and showing women how easy it is to try something new without fear. By following the furniture or art projects my team and I work on, Movers & Makers shows America that when you apply your creative mind, amazing things are possible. People don’t have to be intimidated.

What do you enjoy doing when you are not working in your studio?

I really enjoy yoga, which grounds me physically and spiritually, but I’m a huge fan of horses, hiking, walks along the beach and dancing. I was also an all-state shortstop in high school; so, I love throwing the baseball around. Three years ago, I got behind an indie folk rock band as a manager and helped them produce and promote two albums. I have three kids — 15, 13 and 12; so, I guess I just wanted them to see by example how to experience the richness of life.

Have you shopped at HGR?

In 2010, I became a customer when I heard about HGR from a guy in my building. I told him that I was looking for a rolling cart. He sent me to HGR where I met Tom Tiedman, my salesman, with whom I’ve worked all these years. I’ve repurposed carts, cleaned them up, and inlaid reclaimed wood to make killer side tables. Recently, I bought a bin of washers that were welded into a sculptural award for Crain’s Cleveland Business. I’ve also purchased practical things like filing cabinets and office equipment.

In the coming weeks, my partners at Mont Surfaces and I are launching a webisodes series about my Reflective Design philosophies for creating a sense of calm through various home improvement decisions. I’m a big fan of designing mindful spaces, so the furnishings, the materials, and the colors support well-being. Sourcing salvage items that hold special meaning for the homeowner is a huge part of that. The series will be posted at www.susiefrazier.com, or you can come to one of 78th Street Studios art walks, called THIRD FRIDAYS, taking place on the third Friday of every month from 5 p.m. to 9 p.m. We will most likely run this on a monitor throughout the night.

What is your philosophy? 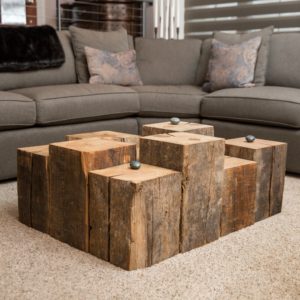