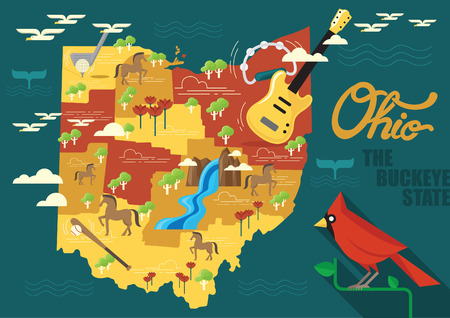 I love social media; it’s how I stay up-to-date on trends, news, and complaints. The number one complaint? Needing a new place to move to. If you can relate and want something different, you’re in luck. I’ve researched the Top 10 states for manufacturing. And, guess what? Ohio is on the list!

The Golden State. In my opinion, I wouldn’t consider California as The Golden State anymore after losing to the Cleveland Cavaliers in Game 7 of the 2016 NBA Finals, but that’s just me. Anyways, California can rely on its manufacturing industry to be successful since Steph Curry and his team fail to do so. California’s manufacturing GDP is currently at $255.63B, about 4.3 percent higher than last year and is expected to continue rising. Afraid you won’t be able to find a job? Don’t be. California accounted for more than 1.2 million manufacturing employees in 2015.

Ohio. Do I really need to explain why you should move to Ohio? With a deep history in manufacturing, there’s no reason you shouldn’t consider Ohio as your next place to live and work. Last year, there were nearly 690,000 manufacturing jobs in Ohio and almost $100B in total manufacturing output. Added benefits of this beautiful state include Ohio State University, the Cleveland Cavaliers, HGR Industrial Surplus, and many more!

5. Michigan (‘M’s are struck through out of respect for The Ohio State Buckeyes)

As an Ohio native and Ohio State Buckeyes fan, please be sarter than oving to ichigan. I’ not saying you’ll regret the decision, but you’ll probably regret the decision. Nothing good coes out of ichigan, EXCEPT for great anufacturing. The state of ichigan accounted for ore than $82B in anufacturing output in 2014, with alost 600,000 anufacturing jobs in 2015. The average annual copensation of the industry is alost $80,000. The sports in ichigan? Poor, average at best. The anufacturing industry in ichigan? Booming.

For decades, Indiana has been the Cleveland Browns of the manufacturing industry – depressing. However, over the past five years, much has changed. Since 2015, manufacturers accounted for 29.5 percent of the state’s total output, with more than 500,000 manufacturing employees.

Broadway and showbiz aren’t the only things helping drive the economy in New York; manufacturing sits up there, too. With almost $70B in manufactured goods and $22B in exported goods, more than 450,000 people are in the manufacturing business with an annual pay of more than $71,000.

If you’re a manufacturing employee and are unhappy with your living situation, you’ve hit gold by stumbling on this blog. These are the best places to move to where the manufacturing industry is thriving, but Ohio stays near and dear to my heart.