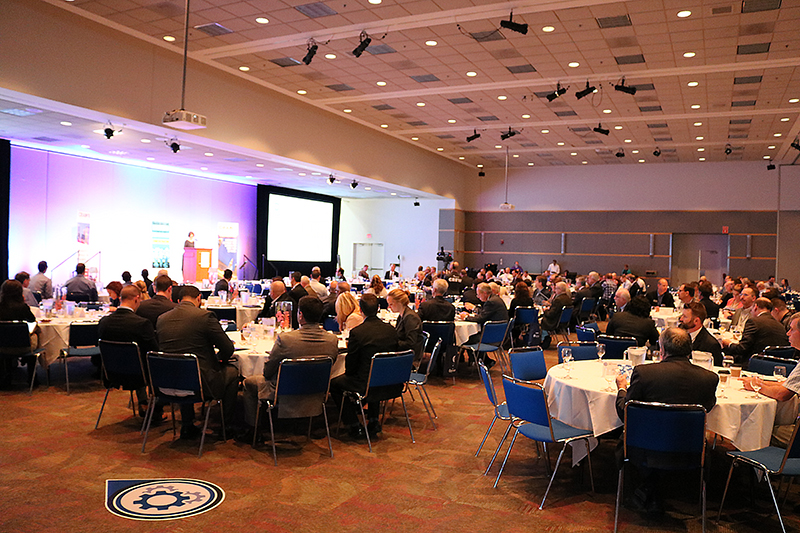 The event was showcased information, stories and demonstrations that spoke to the renaissance in manufacturing, globally and in Northeast Ohio. Some of the highlights included:

According to Ethan Karp, president, MAGNET, in his opening remarks, “Ohio ranks second in the nation for new manufacturing jobs created, and small manufacturing powers 40 percent of Northeast Ohio’s revenue.”

During Skory’s keynote speech, he says, “Ohio is third only to Texas and California in the amount of electricity consumed by industry. We are working to support advanced manufacturing and industry by constantly improving systems.”

Then, I attended the morning breakout entitled “Best practices in sales and marketing: identifying and capturing your customer” presented by Dave Winar, CEO, Winar; Dan Yemma, general manager, M7 Technologies; and Craig Coffey, U.S. marketing communications manager, Lincoln Electric. Winar says his company’s motto is, “Common sense, with humor, we will succeed.” That sounds like a great philosophy to live by! He also shared the “salesman ship” graphic that hangs over his desk and says, “The biggest room in the world is the room for improvement.” Coffey focused on the fact that the way people find information now is different from how they did 10 years ago; so, manufacturers need to evolve the way they approach sales as the closer, not the opener and salespeople as deal makers instead of relationship brokers. He also spoke to the importance of a digital footprint and partnering with digital influencers.

In the lunch keynote, Timken quoted a statistic from the National Association of Manufacturers, “For every $1 spent in manufacturing, $1.81 is added to our economy” and that for every worker hired four more jobs are created. You could see his passion for manufacturing when he stated that, for him, manufacturing is “the excitement of making stuff” and the ripple effect of the interconnectedness of people who make things in the region.

In my second breakout session, “Don’t just teach – inspire students: making learning relevant,” Toni Neary, partnership architect, Edge Factor, showed a number of inspiring and, sometimes, chilling videos that illustrate the art of storytelling to connect with youth who “think the world is purchased, not made.” She says that her company partners with manufacturers to show them that “this isn’t your grandfather’s manufacturing facility. It’s not dark, dirty or dangerous.”