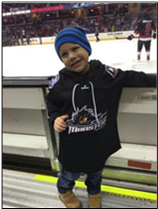 The Lake Erie Monsters, along with their NHL affiliate, the Columbus Blue Jackets, signed Robert Gibson, son of HGR employee Chris Gibson, to a one-day contract on Mar. 18 to fulfill Robert’s wish through the A Special Wish Foundation.

He was born via emergency C-section that resulted in irreversible damage to his kidneys and the death of his twin brother, Michael Charles. On the fourth day of his life, he underwent the first of 14 surgeries to date. After an unsuccessful kidney transplant and additional complications stemming from a rare form of pneumonia, he spent seven months in and out of the hospital. To this day, his immune system is challenged, and he must be monitored to ensure his day-to-day renal function.

While Gibson’s medical challenges have been profound and numerous, they are not what defines him. He is an energetic, excitable four-year-old with a passion for life. He is compassionate, loving and kind, and he loves the Lake Erie Monsters and playing and watching hockey. His wish was to become a “Lake Erie Monsters Player for a Day.” The Monsters and Blue Jackets, in conjunction with the A Special Wish Foundation, made Robert’s wish come true.

“We are so grateful and proud to be working with the Lake Erie Monsters. When they heard about Rob’s wish to be a ‘Monster,’ the entire organization really stepped up and took his wish to an entire new level,” says Jason Beudert, co-founder of the Cleveland Chapter of the A Special Wish Foundation.

Robert’s exciting weekend began on Mar. 16 when Gibson and his family met Monsters Captain Ryan Craig at 3:30 p.m. at Dick’s Sporting Goods in Crocker Park to get geared up for the big day. Craig helped outfit Gibson with new skates, equipment and a stick to make sure he was all set for his pro-hockey adventure.

Friday morning, Gibson arrived at Quicken Loans Arena at 10 a.m. for morning skate with the team and suited up for practice where he fired some shots on goal.

“Robert is as brave a kid as there is, and the determination and heart he’s shown to battle through the obstacles he’s faced is inspiring to me and to our team,” says Monsters Head Coach Jared Bednar.

After morning skate, Gibson’s signing was formally announced to local media during his 11:15 a.m. press conference with Blue Jackets Assistant General Manager Bill Zito, where he signed his one-day NHL contract. This exciting moment was streamed live on the Monsters’ Facebook page.

“We’re extremely excited to welcome Robert to our team,” says Columbus Blue Jackets Assistant General Manager Bill Zito. “He’s a courageous young man who has displayed great determination and strength, and those attributes help make him a great addition to our organization.”

When Gibson returned to The Q for Friday’s game, he entered the Lake Erie dressing room as an official Monsters player. He suited up in his own stall in the team’s locker room and prepared alongside his teammates to take the ice for player introductions and the in-arena announcement of the team’s starting lineup. Gibson then watched the game with his family.

“We are so grateful to A Special Wish and the Lake Erie Monsters for making our son smile bigger than we could have ever hoped for,” says Beth Gibson, Robert’s mother. “While he has been through a lot in his short life, we know this experience will be something he will treasure forever. We can’t say “thank you” enough, and I don’t think we will ever be able to truly articulate what this means to us and him. For him to feel this special is a parent’s dream come true.”