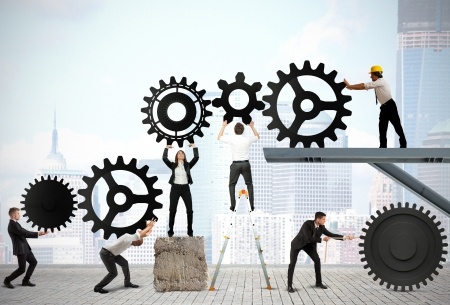 The picture painted by Euclid Mayor Kirsten Holzheimer Gail in her February “State of the City” address was an undeniable account of how committed small business owners, skilled laborers, concerned citizens, and public officials, are to the lakefront city’s restoration.

The spirit of cooperation that many municipalities seek between their councils, school boards and chambers of commerce has reached a measurable degree of fruition in Euclid. The agenda items at any one of their regular meetings often include references to the endeavors of the other agencies. Euclid’s stakeholders have not only achieved, but shown a willingness to sustain, civic growth ahead of individual promotion. Perhaps it also is what so clearly justifies the operations of an outfit like HGR Industrial Surplus.

The commonalities between the industrial surplus giant and the city it calls home go beyond evident. They border on mutually essential.

Mayor Gail acknowledged that the city is facing a 2016 where the city’s plans to maintain growth outpace its budgetary readiness to support it; however, she followed that statement with kudos to HGR and other anchor companies for making timely reinvestment efforts. One needs to look no further than HGR’s plan to provide six figures of square footage to a used car company in the near future. The newcomer will fix and eventually resell vehicles on a scale reflective of HGR’s own business. The resulting tax revenue will only bolster what HGR already generates through its efficient warehouse-style model.

Euclid’s small business community also has expanded in the past year with new eateries, grocers, and a brewery, among others. The infrastructures of buildings that house such operations rely on dependable industrial appliances—electric generators, furnaces and boilers, air conditioning units, compressors, water pumps, etc. Quality customer service also requires cash registers, computers, supply cabinets, vacuum cleaners, water coolers or fountains, and dishwashing units to name a few. Once again, HGR has the flexibility and variety of inventory to address each need.

That city that can galvanize three branches into an emerging vision of civic rebirth is unique. Not so unique are the limitations of financial and material access in pursuit of it. Almost non-existent is an entity like HGR that is prepared from all facets — business model, partnership outreach, and product availability — to provide solutions.