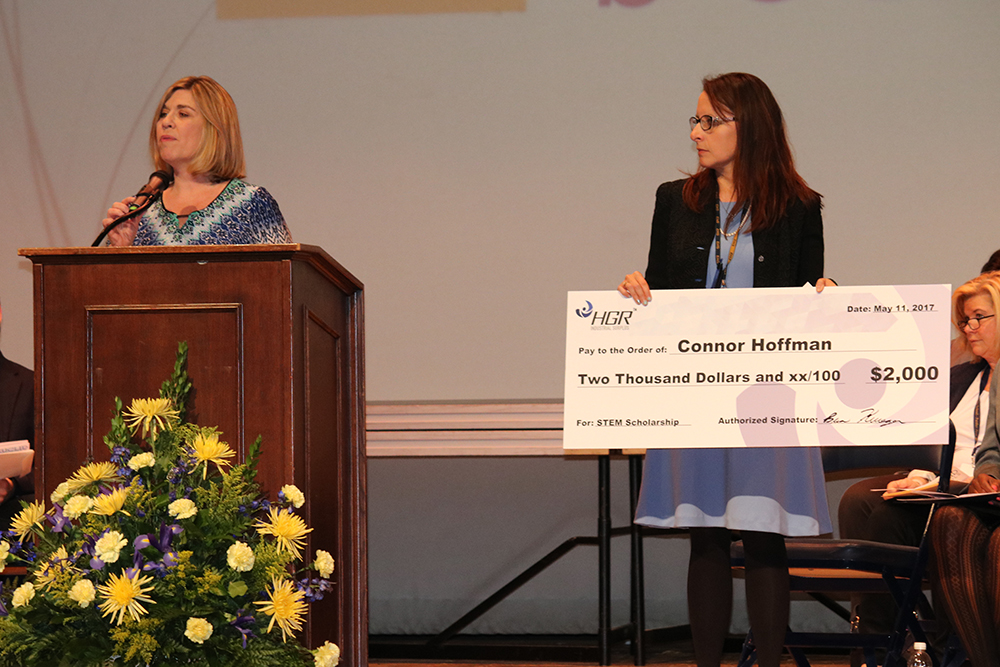 Last night at Euclid High School’s Senior Awards Ceremony, Tina Dick, HGR’s human resources manager, presented Senior Connor Hoffman with HGR’s 2017 S.T.E.M. scholarship that will go toward his first year of college at the University of Cincinnati to pursue a degree in information technology. Connor was not able to be present due to competing in a CISCO Networking Academy National Competition in Florida. A representative from the high school accepted on his behalf.

Upon hearing of Connor’s accomplishment, his teacher Bob Torrelli, Science Department chair, says, “His potential is off the charts. He scored a perfect 36 on the science ACT! That is not easy to do.”

Connor is captain of both the robotics and soccer teams at Euclid High School and an officer of its National Honor Society chapter. In his senior year, he was in AP honors classes at Euclid High School and enrolled in college classes through Lake Erie College In his scholarship application, Connor says, ” Ever since I was young, I had a desire to learn how things work. When one of my toys would break I would open it up and try to see what made it tick. As I got older, this desire to understand the inner workings of things extended to other areas. It led me to join my school’s robotics club where I was able to learn many new things. I learned a lot about machining and assembling parts, as well as designing those parts using computer-assisted design. This desire to learn how things work also led me to enroll in my school’s Cisco Networking program which has set me on my current career path.”