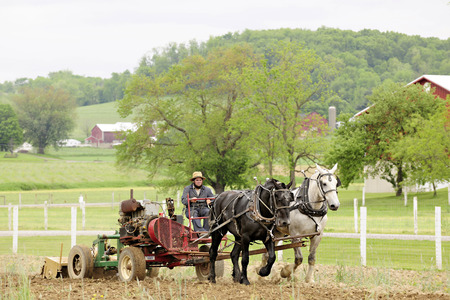 HGR Frequent Shopper Steve Timothy works full time as a millwright at Charter Steel. Sullivan Machine Tooling is his “side job” that he started in 2013 to build as his future retirement job. It all started in 2009 when he bought a 1977 Lincoln Electric doghouse welder, his “newest” piece of equipment, to make repairs for himself. Since he lives in Sullivan, Ohio, a heavily Amish community, his Amish neighbors knew he could weld and asked him to fix farm implements for them. That’s when he started doing repair work. Sometimes, rather than repairing a piece of equipment, it was easier to buy it from HGR and haul it home. So, Timothy began to buy equipment, fix and resell it, as well as haul equipment for the Amish in his community.

Since Amish do not use electricity, they adapt all electrical shop equipment to run off a line shaft with a belt drive. Some of the most common pieces of equipment that Sullivan Machine Tool has adapted include lathes, drill presses that carpenters and metal workers use, and pantographs designed to engrave jewelry that they convert into finish sanders for carpentry use with a rotary orbital head fit into a column with a moveable arm. Timothy says he has used a drill press for the same thing. In an Amish shop, a diesel engine powers a line shaft that runs the length of the shop under the floor and runs on V-belts. Diesel fuel is used because it is more efficient than gasoline.

In Timothy’s shop, he has a 1926 South Bend lathe, a 1937 South Bend lathe, a 1954 Bridgeport mill, a 1954 Cincinnati Bickford drill press that he bought from HGR, a small press and a car lift, plus all the machinery he is converting and tools in a 26-feet-by-30-feet pole barn. He transports equipment he purchases in an F450 dump truck and trailer with a moveable gantry crane and engine hoist.

He says that an Amish machine shop down the road runs a 17,000-pound shear (purchased from HGR), an ironworker, a press brake, lathes and a radial arm drill press, all nonelectrical. It has a tub on the roof to collect rainwater that is gravity-fed into a faucet sink since only well water with a pump would be used. A sawmill in his town uses a $20,000, three-sided planer for flooring and molding. It can plane flat surfaces, profiles and relief cuts. The planer had separate motors but the owner built belt drives and uses a diesel engine to drive the line shaft.

Sullivan Machine Tool does not advertise in local newspapers or online. All of his business is in the Sullivan and Homerville area and done by word of mouth as one person tells another person during their Sunday socials.

When shopping HGR, Timothy watches and purchase online unless there is something he needs to come up in order to check the condition. Then he makes the trip to transport an entire truckload at once. Currently, he has his eye on two gear hobbing machines that he will either use to make his own gears or sell to his Amish customers. The units are not complete; so, he is trying to solve the problem as to how to complete them to make them functional. He purchased a tool grinder with no attachments, pulled the motor off, and mounted a shaft for a drill press. He enjoys repurposing equipment for use as something other than what it was intended.

Timothy lives on 2.5 acres with his wife. His father-in-law lives on the property next door. He has a daughter who is a vet tech and a son who is a business major at The University of Akron. This man loves to keep busy and says he probably never will retire. Do you have a side job? Are a hobbyist? How do you feel about “retirement?”