When I told my mother that I was heading over to the Euclid Beach Boy’s Event Center and Museum at the former Euclid Square Mall to take a tour and interview one of the two “Euclid Beach Boys” owners, she said, “Your Aunt Annie’s company, Richmond Brothers, had its company picnic there every year. The whole family would go all day, with dancing and a beauty contest into the night. Your Grandpa and I would ride the coaster and bug and wild rides. So would Aunt Annie. So many good memories.” I am sure many of you have similar stories.

On Sept. 28, 1969, this area treasure closed for good. Are you old enough to remember Euclid Beach Park? Or maybe you heard your parents or grandparents talking about it? It started out in 1895 as Cleveland’s version of Coney Island. Five investors opened the adult amusement park. It housed a few rides, a beer garden, a bathhouse, shows, concerts and gambling. In 1901, the Humphrey family took over and turned the park into a family-friendly amusement park without alcohol or circus sideshows.

Event Center and Museum Co-owner Joe Tomaro is passionate about the park and has many stories to share with visitors, including some great stories for animal lovers about adopting rescue horses and dogs. In addition to Euclid Beach Park memorabilia, he has some items from Geauga Lake, Chippewa Lake and Sea World. The facility is 9,000 square feet and houses only a portion of his 27,000-square-feet collection. He rents out the center, which can seat up to 300 people, for reunions, birthdays, fundraisers and association meetings. Tomaro also rents out the famous Rocket Ship Car that you can see driving down the streets. If you ever see it or take a ride in it, check out the steering wheel. It’s actually the wheel from a turret lathe that Tomaro got at HGR Industrial Surplus for $25.

(a rocket ship, then and now) 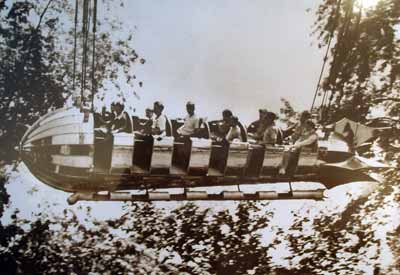 I asked him what his original connection was to Euclid Beach. He said that his uncle was a police officer there who would give the kids his ID. They would show it to the operators and ride the rides for free. He says, “It was our amusement park, and we had a personal attachment.” He explains how the Humphreys were trying to create a safe place that would get people through the rough times of WWI, WWII, The Great Depression and the Korean War. The park was free to get in and five cents per ticket to go on the rides. It was a cheap getaway where families could go dancing or picnic. 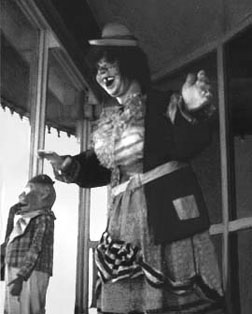 Now, the property is 1/3 apartments, 1/3 trailer park and 1/3 Cleveland Metropark. But you can still get a sense of why it was so well-loved at the museum. I got to see the creepy paper-mache animated doll Laughing Sal that stood at the entrance to the Surprise House since 1935. She looks like the mother of Chuckie. There’s a coaster car that was found in a Shaker Heights man’s backyard. The Euclid Beach Boys had the artisan band organ from the base of the rocket ship ride restored. It still plays a loud tune using paper cylinders, similar to a player piano. This item was rescued from an elderly lady’s garage and was full of mice and termites. The same lady had a huge collection of Euclid Beach Park memorabilia that the partners purchased after she passed away. She stipulated in her will that Tomaro have first dibs on the items. She knew they would remain in good hands. From her collection, you also can see the chair from the Flying Ponies Carousel.

How did Tomaro meet her? The way he meets a lot of people. While he still was running his towing business, he heard that she, who had been friends with his uncle, had Euclid Beach Park items. He walked up and knocked on her door. They became friends. She gave him his uncle’s nightstick. When the park closed, he had given it to her. She saved it all those years.

And, the best reason for visiting The Euclid Beach Boys Event Center and Museum? The original “Frozen Whip” custard. Tomaro says, “The Humphreys changed something in the recipe so that it was unique and you could only get that one-of-a-kind vanilla custard taste experience at their park.”