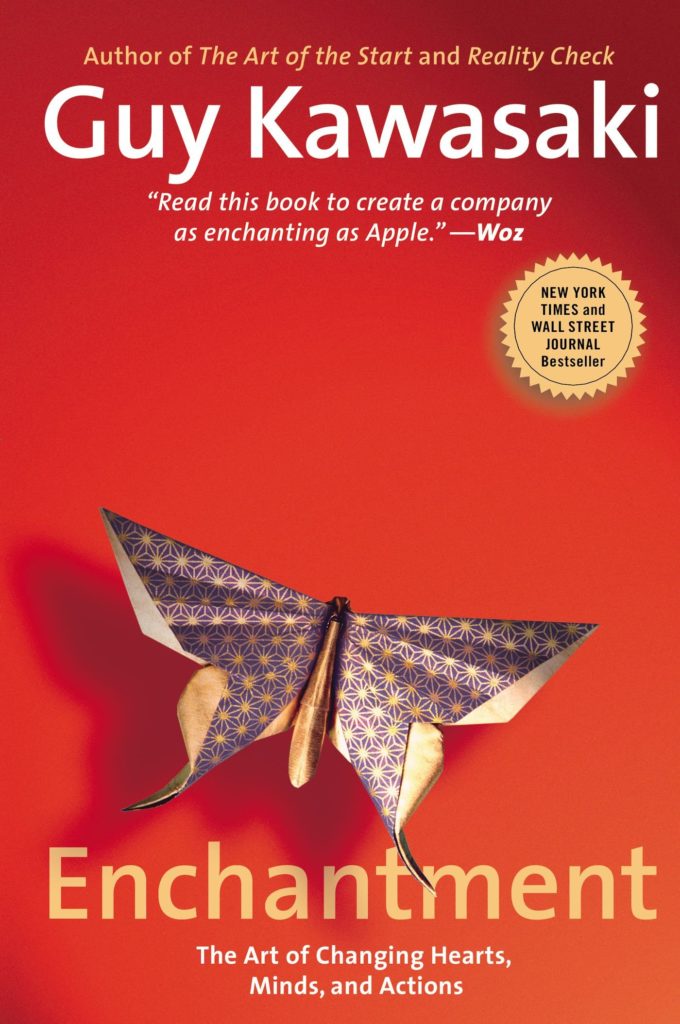 Enchantment is a business book that can be applied to any situation or relationship, but especially helps managers “enchant” their direct reports and any employee “enchant” his or her manager. According to Kawasaki’s introduction, “Enchantment transforms situations and relationships, converts hostility into civility and civility into affinity. It changes skeptics and cynics into believers and the undecided into the loyal.”

He sets out to cover negotiation skills to overcome resistance and motivate others to internalize your values in a lasting way that can be applied to business and personal interactions. Who doesn’t need those? The main tactics involve enlisting others’ goals and desires, being likable and trustworthy, and framing a cause others can embrace. You need to read the book to find out HOW to do so. I will give you a hint though: reciprocity, diversity, and use of technology.

Kawasaki says that with these tactics the reader will be prepared to launch “an enchantment campaign.” He uses the story of Apple’s Macintosh as an example and encourages readers to think of their own Enchantment Hall of Fame list, including products that are deep, intelligent, complete, empowering and elegant (car = Mustang, city = Istanbul, airline = Virgin, political leader = Nelson Mandela).

Some of his advice may sound unorthodox, such as creating crow’s feet around your eyes (a la George Clooney), being passionate, selectively cussing (yes, as in using profanity for emphasis), learning from The Grateful Dead, and thinking Japanese by using Zen design principles to enhance presentations. He also mentions money and success are not the biggest motivators, take Wikipedia’s grassroots success as compared with Microsoft’s millions wasted on failed Encarta — similar product, one started by a successful company with lots of money to invest.

For me, what resonated the most were Chapters 10 (How to Enchant Your Employees) and 11 (How to Enchant Your Boss). In a nutshell, he says that money is often not the sole or primary motivator. Managers need to provide their reports with an opportunity to achieve mastery, autonomy and purpose (MAP). Sounds like employee engagement and recognition initiatives here at PNC? On page 159, he provides a checklist to determine how good of (and enchanting) a boss you are. On the flip side, the steps to enchanting your boss include making him/her look good, dropping everything to do what he/she asks, under promising and over delivering, prototyping your work, showing and broadcasting progress, forming professional friendships, asking for mentoring and delivering bad news early. Makes sense! Some of this you have heard before, but in this book, it’s the “why” that’s an interesting and easy read.