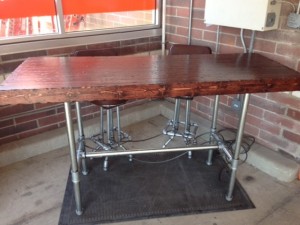 To start, I began my military career in the U.S. Marine Corps on active duty. During my time, I guarded the president of the United States. I was stationed in Quantico, Virginia. After I got out, I began working at Home Depot, but I still had a desire to play military; so, I joined the U.S. Army Reserve and began my numerous travels.

My last deployment was 2011 to 2012. It was a fun roller coaster ride. I was shot once and blown up twice during that tour. I am currently going through my retirement process and will be retired from the military at the end of the month. I started building furniture as a coping means. I started off with building end tables and tables out of wood and pipe fittings. Then, I purchased a welder and taught myself how to weld from reading a few books and watching online tutorials. I began to make metal furniture. I have made a series of lamps and other odds and ends. 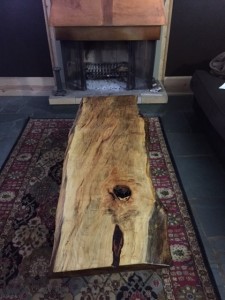 I found out about HGR through my friend Terry. We were out drinking and eating at Oaks and Embers Tavern in Chesterland, Ohio, with our mutual friend Mark when he told me about HGR. He let me know that he purchased a huge vice from them and that it was the best thing he has ever found in his many years of finding tools. I came in one day after work, and the rest is history. This is a brilliant-minds toy store.

I currently work on the railroad as a full-time job and build furniture on the side. Eventually, I hope that I can move into a warehouse and keep building my tool collection so that I can expand my capabilities of building more intricate furniture. My company is called Tortured Creations. I hope, in the future, that I can make a non-profit company where veterans can come and have a place where they can have the tools and supplies to build their own furniture. To be able to begin a project from raw material and create a piece of work has been one of the most fulfilling accomplishments on my road in dealing with PTSD. 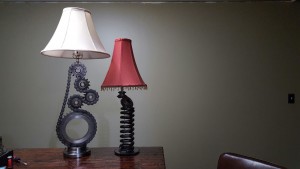