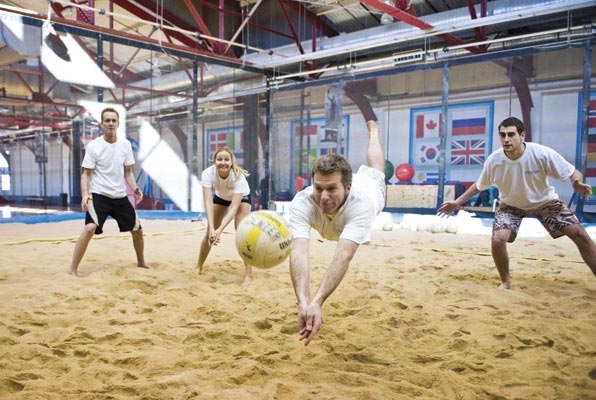 The 60,000-square-foot NEO Sports Plant (www.neosportsplant.com), owned by Rodger Smith, opened May 1 in the site of the former Euclid Sports Plant at 20001 Euclid Avenue in the Nickel Plate Station building behind HGR Industrial Surplus. Smith already has begun renovations, including painting and carpeting the office, cleaning the entire facility, and renovating the bathrooms and locker rooms. He will host a grand reopening in September.

In the meantime, the facility remains open during the summer for youth and adult clinics, camps, tournaments, and private or group lessons on six indoor volleyball courts and four indoor basketball courts. The courts are available for rental to organizations, for business/corporate events, and for private parties and events on a year-round basis.

Smith says that a group of friends or coworkers can form a six-person volleyball team and play for a nine-week session plus two-week playoffs for a around $200 per team plus ref fees. There will be fall, winter and spring leagues. He also plans to start a girls’ J.O. volleyball club where, he says, “Students and parents can get to meet people they never would have met and develop new friendships.” In addition, he would like to see corporate sponsorships of a youth program or individual sponsorships of an underprivileged youth.

The facility also has a weight room for athletic training and conditioning run by Mac Stephens, former NFL linebacker with the New York Jets and Minnesota Vikings and Cleveland Heights head football coach. His team works out here, and college talent scouts have frequented the facility.

Smith is seeking a grant to dress up the storefront and working to get a liquor license in order to open a bar and grill for participants.

When asked about his lifelong love of sports, he says, “My parents said I would shoot a basket in my crib, and when it would fall out I would start crying.” He played basketball in junior high and high school and football in high school. He got involved with volleyball as a senior in high school and, according to him, “It became an addiction.”

From 2003-2014 he worked in many roles with a facility in Eastlake. In the beginning it was Club Ultimate. When he started with Club Ultimate there were only four outdoor sand courts and about 60 teams. By 2009, he was able to put four indoor courts to go along with the sand courts. In 2010, One Wellness Sports and Health took over the facility. Smith started as an employee and eventually leased space from them to start his own business. From 2010-2014 indoor leagues grew from 60 to 180 teams, and they added two outdoor sand courts. In February 2014, Force Sports bought the business from One Wellness, and Smith became their employee. During the next year and a half he worked with Force to implement their programs. After building the adult volleyball program to 250 indoor teams and more than 300 sand teams, they parted ways. That’s where HGR came into play.

He knew Ron Tiedman, HGR’s chief production operations officer and co-owner, who was a member at One Wellness and whose daughter played for the J.O. volleyball club that practiced there. Smith also was a customer of HGR. Tiedman called him after HGR bought its building to see if Force wanted to expand into the area. It did not.

In April 2016, Smith decided to branch out onto his own, Tiedman put him in touch with the owner of Euclid Sports Plant. Smith bought the business, changed the name, invested in the facility and is committed to bringing volleyball and basketball to youth and adults in the region. He says, “I put people and the game before business without hurting the business.” Smith and his team plan to put in the same work ethic as he did to build the previous business and is excited and thankful for the opportunity to do it again.