It was a gloomy overcast day out at Lakeland Community College for the 2017 AWT RoboBots Competition, but the future looks bright for the students on “The Untouchables” robotics team at Euclid High School. They worked all year at perfecting their weapon, and with early tests it looked like it paid off. The Untouchables were in the pit making last second adjustments while awaiting their match. They looked nervous but eager to see their bot in action.

The morning’s matches began with big hits and fast finishes. The weapons were causing a lot of damage and some matches were over after the first hit. It was Euclid’s turn to step into the octagon. Their weapon looked as impressive in their first match as it did in the test runs. As the bots charged each other, The Untouchables’ weapon struck the first blow hitting the team from Perry, Ohio, hard and disabling their weapon. After a few more hits, Perry was sent scrambling around to try and recover without a weapon. Unfortunately, the drive system for Euclid started to fail, and their mobility was slowed to a plodding stumble. They could hit Perry hard enough to knock them out, but couldn’t move enough to target them. Perry took advantage of this by maneuvering around them and eventually pinning Euclid to the side a few times, earning them points from the judges. Even when Euclid used their one release, Perry was able to use their agility to once again pin The Untouchables. That proved to be too much for the team from Euclid, and they lost a judge’s decision in the first round, which sent them to the consolation bracket.

They were disappointed in the pit. Their weapon could do the job, but moving was an issue and needed remedied. They all jumped on a task and got to work immediately. Time was an issue with the next round beginning in 20 minutes. They had to recharge and make improvements on the fly. Before you knew it, the announcer was calling Euclid to the set-up and weigh-in table. They tested the movement, and it seemed to have improved some, but not to the point they had hoped. It was do-or-die time for The Untouchables.

Their next opponent was a team from Pennsylvania, and Euclid wanted to show what their bot was made of. From the start, the bot wasn’t moving how they wanted it to; so, they planned their attack around their inability to move. The other team worked hard to move around them and hit Euclid hard with their weapon, which sent Euclid’s bot up in the air. When it landed, however, Euclid’s weapon made contact with their gear and knocked their weapon offline. The Pennsylvania team tried to maintain the aggression and pin The Untouchables, which resulted in a few points from the judges. There were just seconds to go when the Pennsylvania team tried to approach one last time. It proved to be their undoing. Euclid’s weapon caught the other team’s bot hard and sent it through the air for a last-second knockout in dramatic fashion. The Untouchables would live to fight another round.

The stage turned to the JuniorBots Competition which gave Euclid over an hour to work on their bot. Coming off their exciting victory, they wanted to get the bot back into the best shape for their next match. Euclid won on a forfeit due to the power failure of the other bot. They needed to win a few more to battle back into the finals bracket, and their next match was a tough one against Kirtland.

Kirtland‘s bot was fast and compact. The weapon was similar to Euclid’s but smaller and more direct in its attack. From the start, Euclid still was moving slowly but adapting well with a defensive strategy. Kirtland was moving around Euclid as if it were testing their defenses. After a few small hits, Kirtland went in for the kill. Euclid took the first few shots like a champ, but their weapon couldn’t lay a good hit on the faster, more agile bot. The Untouchables bot was fighting, but pieces were being torn from it by the other team’s weapon, and its bot was so low to the ground, Euclid couldn’t lift it when it did make contact. As buzzer went off and its bot lay in pieces, The Untouchables day was over.

As I walked out at the end of the day and looked at the sky, it was still gloomy and overcast without a single ray of sun. As I look to the future of Euclid High School robotics, it looks very bright. They have a weapon to be reckoned with and small improvements to be made to the drive system. When it all comes together, I may be writing this same article next year, with a very different outcome.

This year’s winners were repeat champions from 2016, The A-Tech Machinists from Ashtabula. They defeated Beaumont in the final round to go undefeated for the regional bracket and are on their way to the state finals. As a reward, they received the $500 scholarship from HGR Industrial Surplus, which I presented to the winning team. 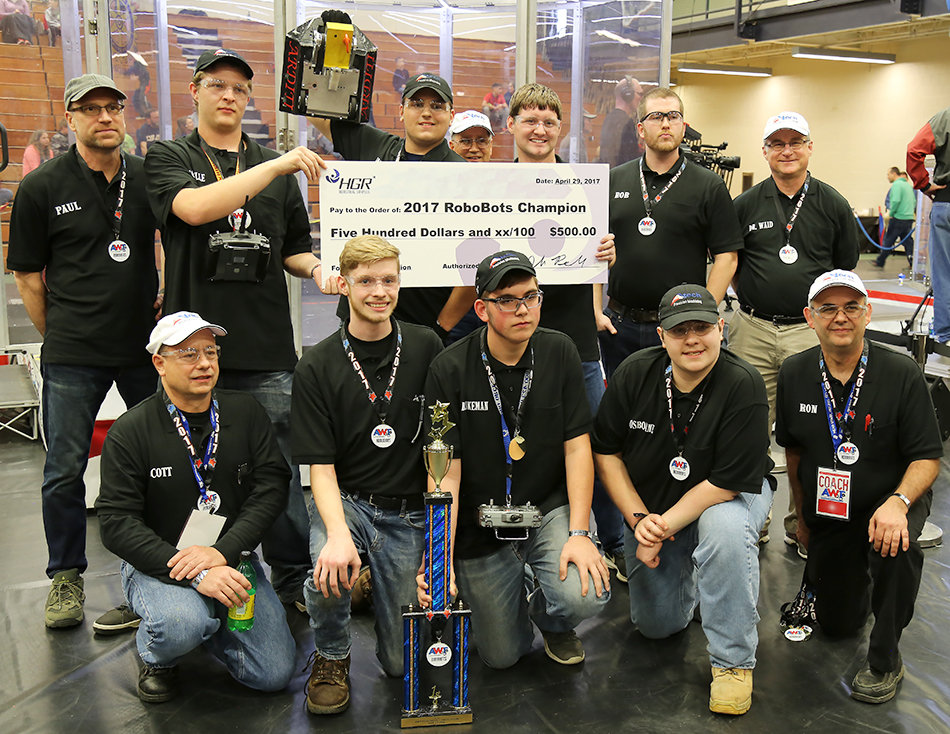